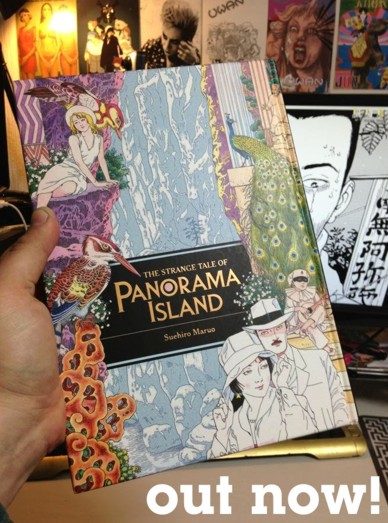 In other news, “Panorama Island”, a manga that Ryan Sands and I adapted into English is now available! It’s being put out by Last Gasp, and is now available to purchase in lots of different places, such as directly from Last Gasp, or via Amazon, for example. It was a dream project to work on, since it’s a Maruo comic, based off of an Edogawa Ranpo story. The book came out beautifully, and is a nice big hardcover. Here’s what Amazon has to say about the story.
On a remote and mysterious island, one man builds a playground of hedonistic excess – replete with waterfalls, grand palaces, and gardens – a backdrop for his decadent feasts, orgies, and dark secrets. Set in 1920s Japan, The Strange Tale of Panorama Island follows the twisted path of failed novelist Hitomi, who bears an uncanny resemblance to the son of a rich industrialist family. Hitomi learns of the rich man’s sudden passing and creates a desperate plan. He fakes his own death, digs up and hides the other man’s body, and then washes himself up starving on a beach near the home of the dead man’s family. After successfully impersonating the now-dead son, Hitomi takes over all aspects of the industrialist’s life, including his company, his fortune, and eventually his wife. The failed author soon redirects the family’s wealth to his own perverse aims. A graphic novel based on the revered novella by Edogawa Rampo. Rampo was the godfather of Japanese pulp mysteries. Stunning artwork by master manga artist Suehiro Maruo deftly illustrates this Japanese pulp classic in fine detail. * 13th Tezuka Osamu Cultural Prize for New Artist

I handled the lettering, touch-up, and book design, while Ryan handled the editing. Ryan and Kyoko Nitta did translation. Pick up a copy and enjoy it 🙂