catching up with the Deathscape Navigator 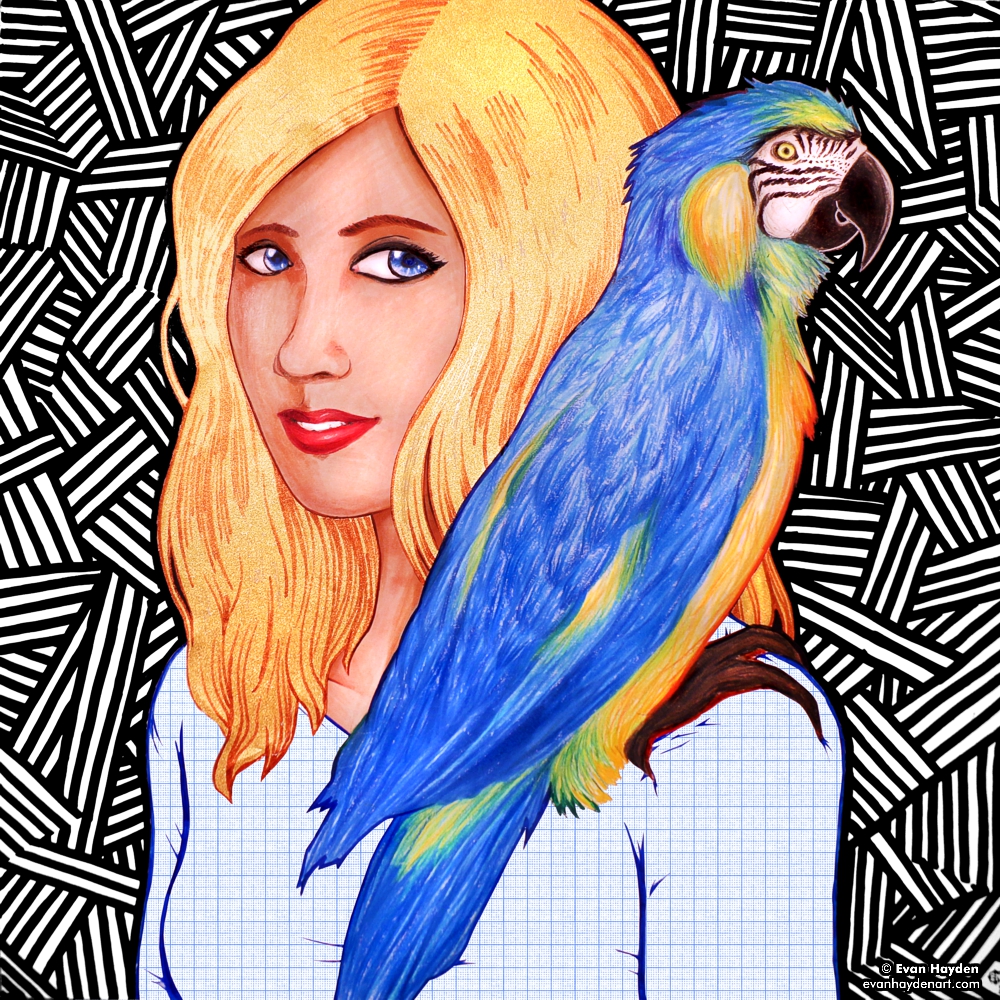 Hey folks! I’ve been dreadfully busy, as usual, but I made a little time when I was visiting Michigan recently (where most of my art supplies are) and made some new art. This piece, “Flock Together”, is the fourth in my series of pretty women with cute animals that I’ve been doing each of the last four autumns. I was planning on ending the series with this fourth one. If I get in the mood, I might make a couple more in the future, but for now, four seems like a nice even number to end it on. Click the above picture, or here, to see bonus stuff!

In other news, I went through the site over the last couple days and fine-tuned it a lot. All of the image thumbnails are bigger now, fonts are tweaked, and each main gallery page has a more colorful header. I also moved some more stuff to the Archive page, and took a few really old stuff off said page. I have a few new things I’ve been meaning to add, but will do that soon when I have a little more spare time.

Captain America VS The Nazis


Feeling deeply troubled by the news of the racism and violence in Charlottesville, I decided to make something cathartic, and a tribute to Jack Kirby’s great 1941 Captain America issue 1 cover. 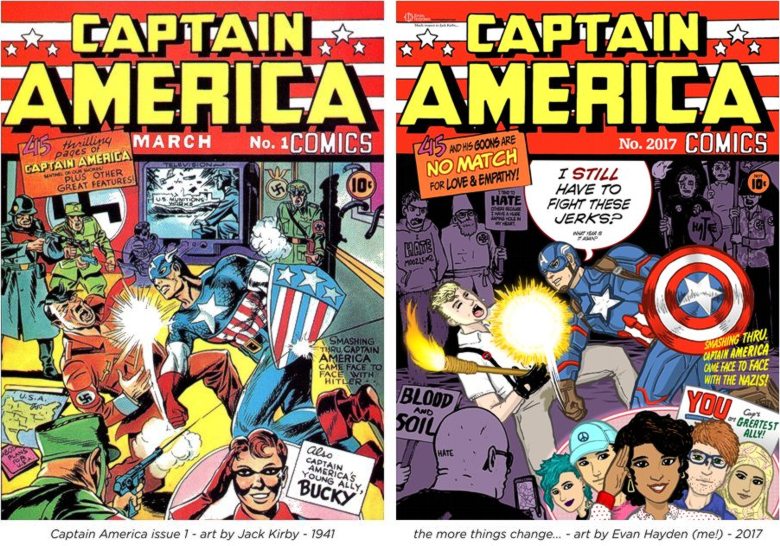 It seems like history is repeating, no matter what name this hatred labels itself. Alt-right? Nahhhh, Nazis by any other name. I’ve never been a blind patriot, but I’ve always appreciated the multicultural side of America, and the fact that our major metropolitan areas are like microcosms of the world. I think the mix of cultures makes us all stronger, and I deeply sad to see that some people would want to hurt that diversity. If Captain America were real, I don’t think he’d approve. Anyway, this was a fun little thing to make. Click the pic above, or here, to check out a much larger view of this piece, as well as bonus stuff! 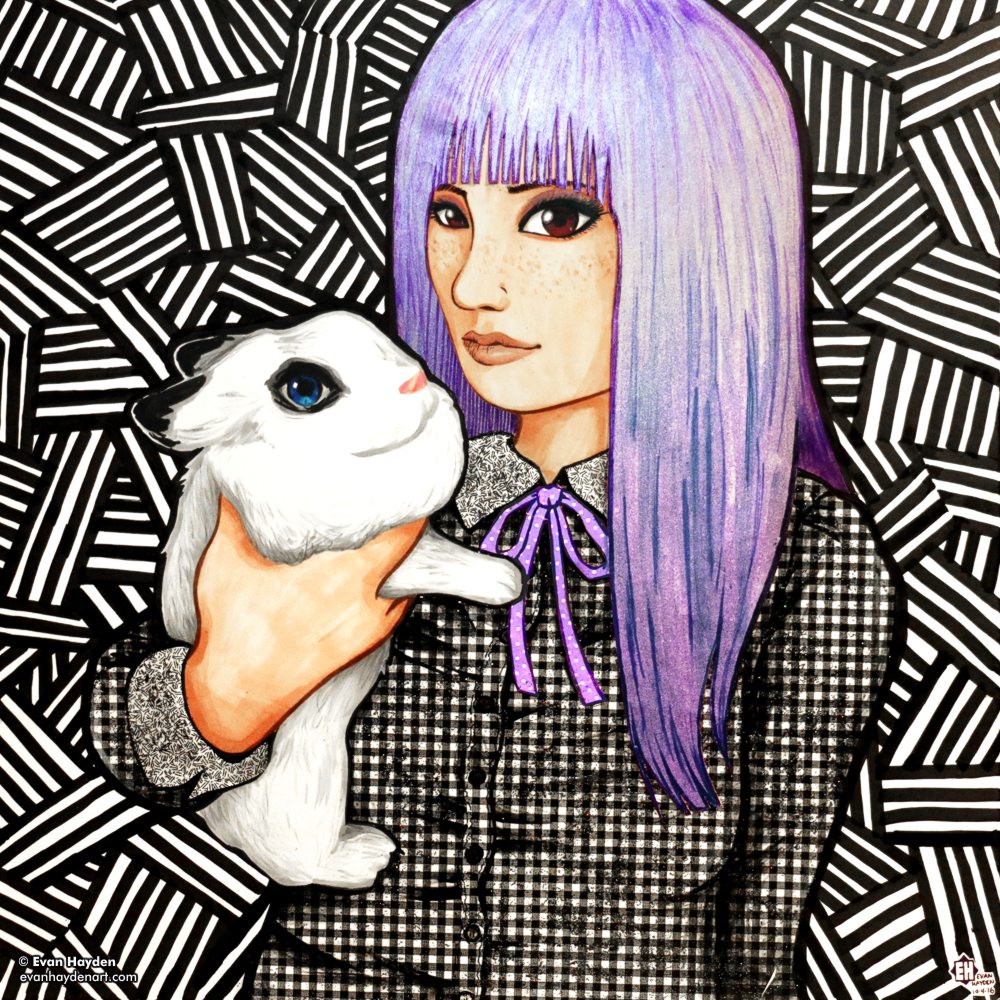 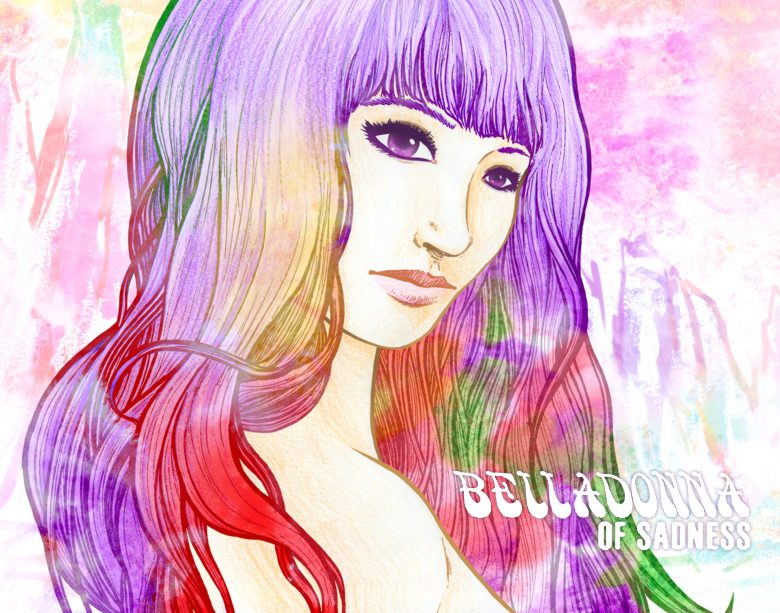 New art “Smooch”, and big news for next year! 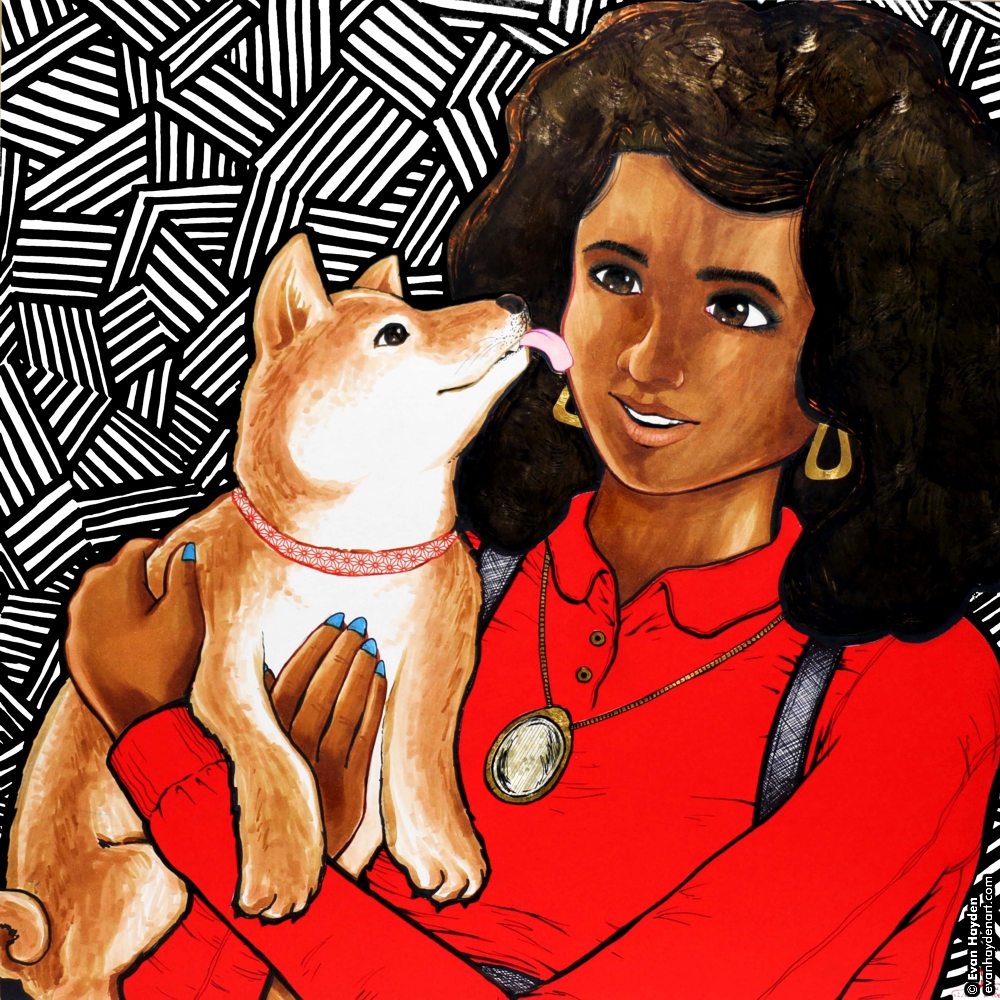 After a long time of being too busy to work on personal art (still sort of am), I made a sequel to last year’s “Her Best Friend“, and this one features a pretty lady with a cute shiba inu! Like the last one, this was done on a big shikishi board, with Copic markers and metallic washi paper (the hair). The red is a really vivid washi paper with lovely texture that looks great IRL. I may do another one or two illustrations in this series.

In other news, I apologize for the long time since last post. I’ve been super duper busy with the day job + manga lettering, and now…. getting ready to move home! Yep, after three years in Nagasaki, I’m leaving Japan to go back to the states. Couple reasons… the reason that’s been pressing at me for a long while is that I need to help my parents clean up and move out of the house I grew up in so they can get their finances in order and so we can all sort through our respective collections of stuff. I was going to hang in there with my current teaching job in Japan until August ’16 and then move home to help out, but a very nice opportunity came up that I couldn’t pass up. As you may know,  I’ve been lettering manga for Kodansha Comics / Penguin Random House this past three years, and have built up a nice relationship with them and have worked on a bunch of fun books for them. For next year I had the opportunity to either take one one new books series (in addition to the ones I’ve been doing), and keep trying to balance that with the demands of my day job, or quit the day job and take four new series. Truthfully, it’s been exhausting this past year, doing a book per month in addition to day job, in addition to spending time with my girlfriend and pals, and getting sleep, and I enjoy doing the publishing work more these days than teaching, so it was time for a change. As of January, I’ll be back in Southeast Michigan, focusing on my manga lettering work (and cleaning the house, and going on Fallout 4 binges). The pay will be better and the workload lighter, on average. This is great as it’ll allow me more time to work on my own art in my spare time. I’m not 100% sure how long I’ll be back in Michigan, but it depends on how long the house takes to get ready, and how long I want to enjoy socking away extra money from living cheaply before I run myself through the ringer of living in a “hip” place again. Also, the plan is my girlfriend will stay with me there for three months in the spring (the longest she can stay in the states as a tourist), and we’ll decide what we want to do from there, in terms of staying together and where we might live. Anyway, I’ll be busy for the rest of the year and most of January, so I probably won’t be updating this blog for a while, but once I have my current two books done, have moved out of my apartment, and have tied up loose ends in Japan, I’ll be resettling back in my old home and will have many more updates for you. Exciting times!

I just finished up a fun new illustration, “Saturn“. This was a bit of an experiment for me, as I don’t often paint, and I just bought myself a nice watercolor set recently to try to have fun with. The original art was drawn in marker, then colored with watercolor, then I reapplied the outlines on the computer. I think it’s a fun result. Click on the pic, or here to see the full image and bonus making-of images! 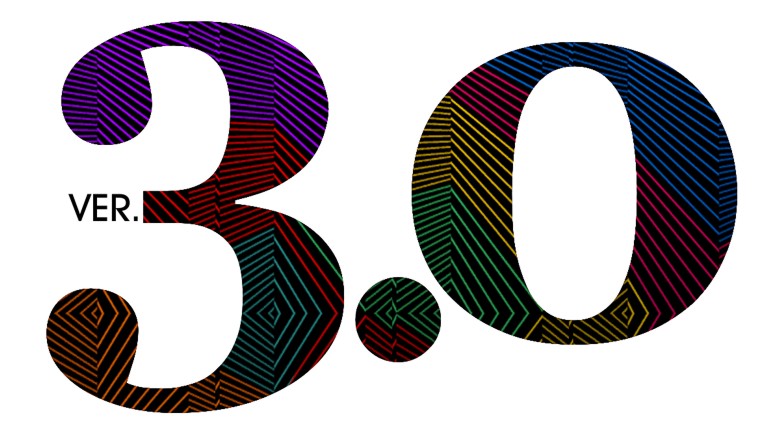 It’s finally done… After five years I finally gave my art site a complete overhaul and it’s now online. This is my biggest site redesign yet, and I started over from scratch. Here are some of the changes I made:

Okay, I think that about sums it up! Jeez, sorry to type a novel here, but this is the biggest update ever to my art site and there was a lot to cover! I’ll have more art coming soon, so stay tuned! 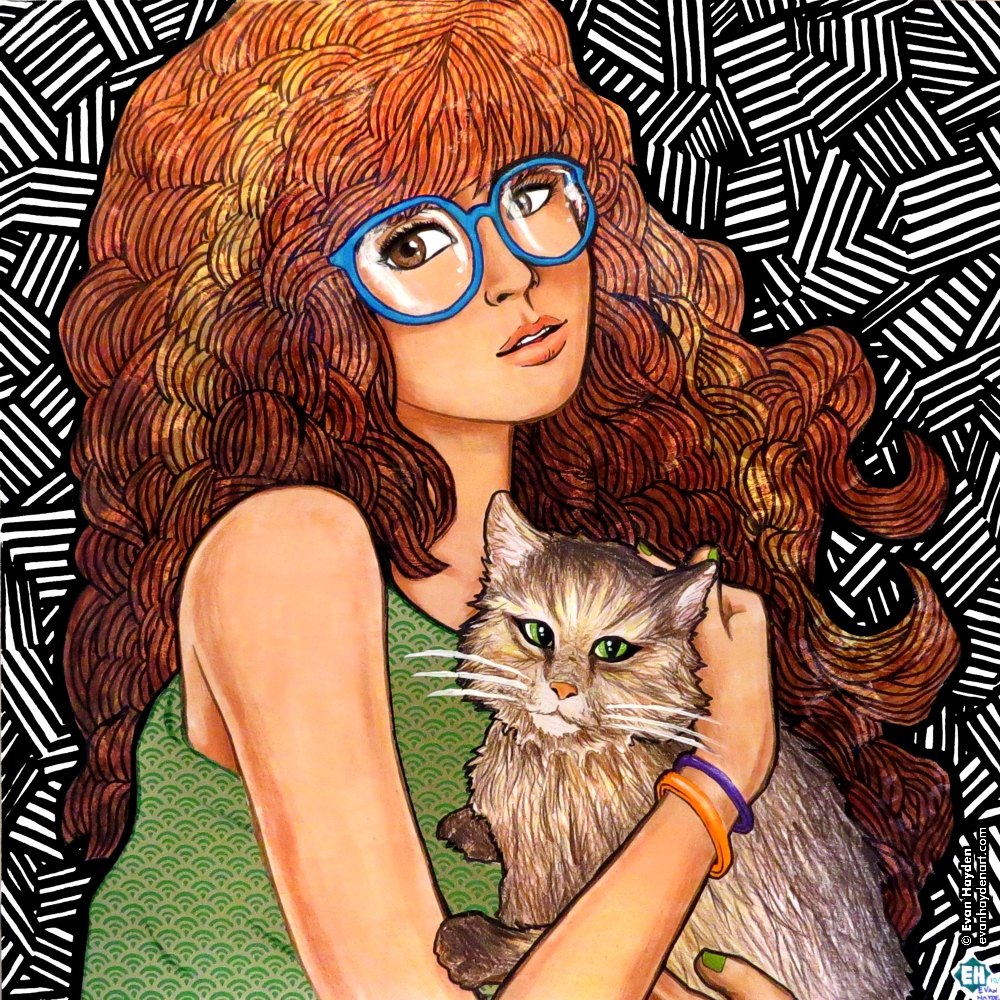 Another fun image made with fancy Japanese washi paper on a big shikishi board. I made this last October, to show at the culture festival day at one of the junior high schools I teach at in Nagasaki, and am getting it posted now. The kitty is none other than my kitty, Magnus!  Sadly, a couple months after I made this, my beloved kitty passed on from a kidney problem, so this illustration has taken on extra significance for me. Rest in peace, my little buddy…
Anyway, if you’d like to see a bigger view of the image, as well as details & the making-of, click here! Also, you can download a big wallpaper for your monitor there 🙂 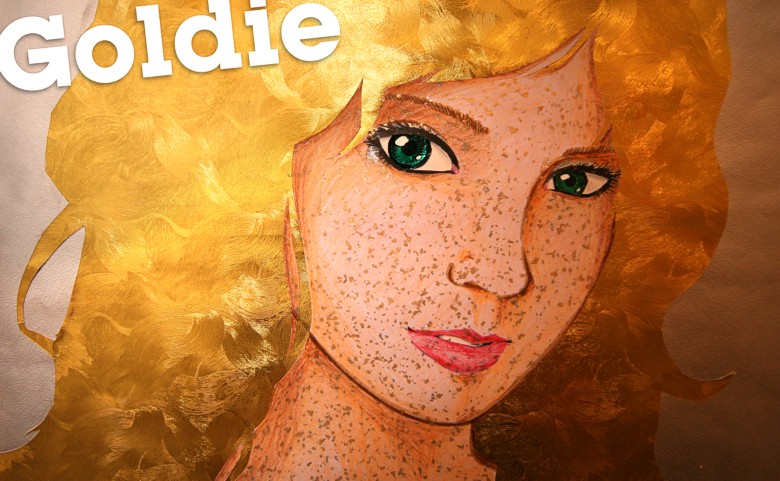 I made a big, pretty new illustration (that’s also nsfw because of bewbz), called “Goldie“.  This piece was a fun new direction for me. While shopping at my favorite art supply store in Nagasaki, I saw a couple pieces of washi paper that instantly inspired me. One was metallic gold and full of swirls. This reminded me of curly blonde hair. There was also a piece of white paper with golden speckles (and a few silver speckles here & there), that reminded me of freckles. Using these, as well as silver washi paper for the background and metallic green origami paper for her eyes, I set about making an image of the pretty lady you see here. I worked larger than usual, and it was pretty fun to get out of my usual comfort zones. Since it’s too big to scan, I took photos, so hopefully the one you see above looks okay. It’s about the closest I could get. Since there’s metallic stuff everywhere, it’s very hard to photograph. I’ll be working with washi paper more in the near future as I really love the look. I just bought several new sheets of crazy patterns and am excited to get to work!

Anyway, if you’d like to see the full image, as well as details, the making-of, click here! Also, you can download a big wallpaper for your monitor there 🙂