Guess what kids, I’m not dead. Although I would forgive you for thinking that due to the conspicuous lack of updates around here lately. Let’s just say that life punched me in the face, but it wasn’t a TKO, so here I am posting some new art! At last! You may remember in my last blog post (6 months ago, argh!), I posted a little sneak preview of this in it’s very early stages (after only 2-3 hours of illustration / compositing). Well, 60+ hrs of work later, spread out over several months, here it is: 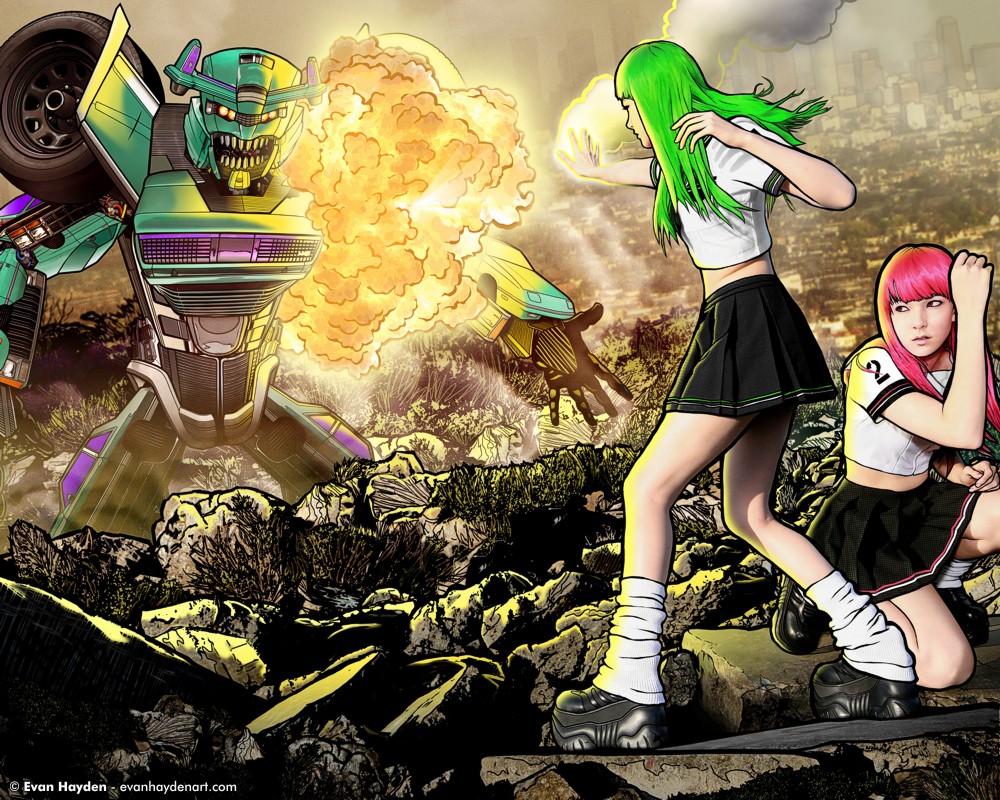 In the midst of an epic battle, twin psychic school girls deal a decisive blow upon a towering giant robot. Pretty much my magnum opus thus far… It’s the third in my giant robot series, but there’s more to it than just that. From my middle school days until the early days of college, I was a huge anime nerd. I also read a ton of manga. These two mediums have had a profound effect on my art style, techniques, and favorite themes to this day. Though I am still being a big manga fan, I don’t watch much anime anymore. I got sort of burned-out, and didn’t feel like I was seeing enough variety in the modern-day anime (with the exceptions of auteurs such as Satoshi Kon, Mamoru Oshii, and Katsuhiro Otomo).

Despite the disaffection with modern anime, I still have a strong love of the stuff I grew up on, tracing back to being a 4 year old and watching Robotech with my older brother. That had a profound effect on me. In this piece, I pay tribute to that, as well as Mai the Psychic Girl, Gundam, Domu, Project A-Ko, Cutey Honey, and other bits and bobs of Japanese pop culture that I grew up with, as well as a little dose of Transformers. Basically as you can see, giant robots and psychic battles are two of my favorite subject matters!

I shot this (the girls and part of the background at least) with one of my favorite models, Raven Le Faye, in Berkeley over a year ago. The robot is made up of over 20 different cars that I shot in Michigan and California. I shot the distant background in Los Angeles. Lots of stuff going on in this… I’m very pleased to finally be releasing it into the world after so long.

On a semi-sad note, this is going to be my last “super epic”, super detailed piece for a while.. It took me too long to make (over 60 hours) as I work much slower in Wacom than anything analog. Most of my illustrated-photography pieces take me between 15 and 30 hrs, which is also a long time, but this one was ridiculous. Just the robot on it’s own would have normally been a piece on its own, but I decided to take this piece farther. That said, I really need to buy a Wacom Cintiq, for a more 1:1 drawing experience – as opposed to the disconnect one gets from drawing on the desk and looking at the screen. I think this would speed up my workflow considerably. Problem is, I’m broke, so until I can scrape together the extra cash, I’m going to have to stick with more simple pieces for a little bit, otherwise I’ll only get one new piece done every several months, which is not enough for me. Good to pause this era (for now at least), with a BANG! (literally, in this case, hence the explosion)

I decided since this new work is particularly special to me that I’d throw in a little bonus. Click the above image, or here, to see a detailed “Making of” / behind-the-scenes for this work.

Special thanks to Raven for modeling for this. You’ll see her in a couple other works on the site, and you will be seeing her in more work soon! For example, another illustrated photography piece, a much more simple one that I’ll be getting to soon… Also, she modeled for a pin-up / alt / fetish / nudie set that I’ll be submitting to Zivity soon. That’s very new territory for me, and was a fun experience. Once I get that posted, I’ll direct you there (all of you over 18 yrs old, at least!). Also, I’ll be posting an EGL shoot I did with her soon (and if you didn’t see these really cute pics from a year ago, you should!) Thanks also go out to Ryan Sands, David Murray, and Dawon Kim for giving me feedback at various stages along the way of the creation of this beast! Also thanks to Lady Gaga, Skrillex, Wham!, Dschingis Khan, Arabesque, and the TalkRadar and Gamespy Debriefing podcasts for supplying background sounds for the big push this past week.

In other news, I have more stuff to post soon. Other stuff that I’ve been working on over the past few months, but haven’t had the time to organize into gallery pages yet. A shoot with Beau (some of which is edited and done, some note)… Also the ongoing product photography work I’ve been doing for my buddy Seibei / David Murray, and also product photography I did for Babushka Designs / Tatiana Jimenez. Both of those coming soon (or you could just look at those links and buy some awesome stuff!) You’ll also notice that I upped the font size on the last stuff I uploaded. I’ll be doing this throughout the site soon, I’m just super lazy right now. the old text looked great on lower-resolution screens, but I’m finding it hard to read on my 22″ Samsung, and I’m guessing you might too! Okay, gotta get a little sleep now! It’s after 7am and I’ve been in a creative trance!